How to set an FX series panels network?

If two local networks have already 4 panels/units each (the max number) the remaining 6 can only be FXMASTER panels, without other panels to be connected since the max capacity of the whole network has already been reached.

FX/10 control panels shall be equipped with FX10485 optional board.

All panels/units shall be equipped with a FXMASTERINT interface required to connect the panel to the local network:

In addition, if within the keyboards network there are at least two FXPRO panels and/or FXMASTER boards, it will be necessary to buy one FXMASTERINT interface for each of the FXPRO and FXMASTER devices.

To connect a FXUP expansion unit to the local network:

For FXPRO, all wirings have been made by default. FXMASTERINT module is already connected to socket 1, properly wired and equipped with an end-of-line resitance.

Save to each keyboard ID and socket of all panels/units.

What to do in case of "open line" fault (or similar)?

Such fault indicates that the circuit of the line indicated in the error message is interrupted.

The circuit indicated in the error message can be:

Restore the circuit to solve the problem.

What to do in case of "short earth GND" fault?

Note: such error may occur also during the connection via USB cable, CP8/SER2 cable or similar to the PC used for the setup. In such case, the error will be reset at the end of the connection.

The circuit of all power outputs and all data lines of EL.MO. panels, excluded the RS‑485 serial line, features a galvanic isolator that provides isolation against panel earth.

The contact between a line/loop negative and the cable shield will cause a fault signal when grounded.

How to find faulty lines

Disconnect all lines, included loop and serial lines, and reset the panel, then wait for two minutes.

If the short earth GND fault is not reset, the board has been damaged or is defective.

Connect all lines again, one at a time, waiting for two minutes in order to see if the fault reappears before proceeding with the next line.

If the fault reappears, control the last line connected, as indicated below.

When the line is restored completely, reconnect the remaining lines waiting for two minutes between one and the next one. When the fault reappears, it means that the last line reconnected is faulty and needs reparing.

Below are detailed points that illustrate the procedure.

The following diagram is an example with several faults, illustrating also the steps made to individuate them all

How to set the address of devices on serial lines or loops?

Some devices, such as inout/output modules, use also addresses immediately after the one set. Such addresses shall not be set for other devices and shall not be greater than the last address available on the loop (254).

How to use extinguishing modules?

Automated extinguishing systems mainly consist of a series of nozzles connected via pipes to an under pressure container where the extinguishing substances are stored.

Nozzles opening and the releasing of the extinguishing substances is controlled by an extinguishing module installed on a compatible fire detection panel.

Substances release can also be controlled by a panel event or by yellow manual call points (pressed or not). The release will be retarded in order to allow people to leave the protected premises.

Once received the release command, the extinguishing module will signal the imminent release through a dedicated alarm line.

To delay the release, press and hold one of blue manual call points.

To cancel the release, reset the panel.

The module is also equipped with an input to control extinguishing substances pressure (to be connected to a pressure switch) and monitor the real substance release .

In the diagram below, a magnetic contact is connected in series to the release delayed call point.

Make sure the call point is connected as NC and that INT.EM. input is set to work with NC devices.

EXTING module can be set to reset the alarm event caused by call points pressure or magnetic contact opening once that the call point is reset and the door closed. AUX2 panel output, that is automatically assigned to INT.EM. supervision, will reset consequently. 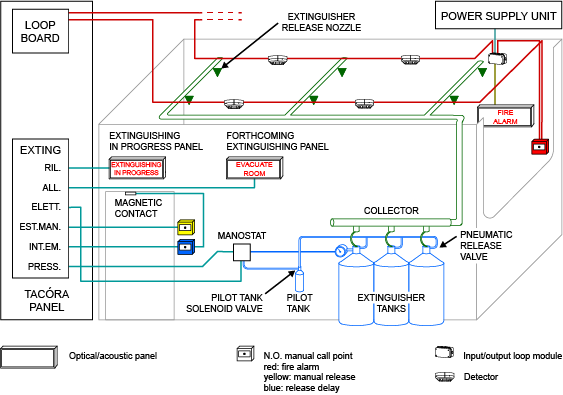 The following FAQs are intended for security professionals only and use technical jargon.

*This data will be used by our technicians for statistical purposes, in order to improve our service. If you would rather not tell, choose "Ask me later". You will be able to modify your choice using the button at the end of the page.